Kurt Albert is one of the leading tap dance artist of Germany with over 30 years of experience in international showbusiness. He was a protege of tap master Carnell Lyons from Kansas City and member of Brenda Bufalinos „International Tap Dance Orchestra“ 1987 he was founding member of the „Shim Sham Tap Dance Trio“, then from 1995 on with his partner Klaus Bleis in the most successful German Tap Duo „Tap & Tray“ and with Josh Hilberman in the formation „Tap Tray & the fool“.

In addition to his continuing work with “Tap and Tray”, he worked from 2009 on in the Jazz Band “Melody Rhythm and Tap” with drummer Allen Blairman and saxophone player Olaf Schönborn. Since 2022 he also dances with Thomas Marek in their Vienna „Jazz Tap Project“ 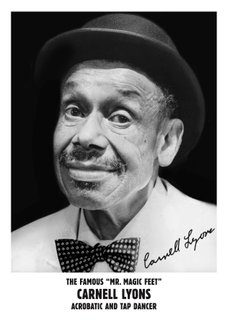 Kurt currently started writing the Biografie of Carnell Lyons whose life he has thorougly investigated the last 30 years.
Carnell Lyons was born 1917 in Kansas City Missouri grew up with Charly Parker and learned to tap in the streets of Kansas City. He toured the US with his tap Trio „The 3 Businessmen of Rhythm“ performing with Duke Ellington, Louis Armstrong, Nat King Cole ,Fletcher Henderson and many more orchestras. Being friend and admirer of tap great Baby Laurence he became one of the well known Paddle and Roll stylists of the 40ties and 50ties.

With the tap and acrobatic trio „Jesse James & Cornell“ he climed to the heights of black american showbusiness of the 50ties performing Las Vegas, Radio City Music hall, with Sinatra, Judie Garland, Josephine Backer and so on. In the mid 50ties he emigrated to Europa and started teaching tap 1979 in Germany.